Ramaphosa, ANC & Abdool Karim Want To Flatten the Economy, NOT The Curve, Because The Party & Socialism are More Important Than The Economy! COVID19: Converting Capitalism to Socialism…

#CommunistVirus The CoronaVirus presents an existential threat in SA, but to who? After the landmark presentation with Salim Abdool Karim last week, we were left with a feeling that something was not right. Now this is normal whenever it comes to anything to do with the ANC regime, but it is usually quite obvious. As the infection numbers come in everyday I have realised the problem. Karim has inexplicably pegged the return to semi or normal life at a very low, impossible threshold. In fact he says so himself when he admits that we cannot escape the Covid19 epidemic and that the curve will increase. He is right, the CCPvirus is here to stay and like the flu, we will all have to come to terms with it sooner or later. Obviously later, with the benefit of a vaccine would be preferable, but 80% of us will survive just fine without one.

Despite this, Salim Abdool Karim set an impossibly low threshold for his exit of the lockdown stage, which was probably just to pretend or offer some hope to motivate people to stay home. If the idea is to flatten the curve, then he would not be setting an impossibly small threshold for returning to normal, as South Africa’s hospitals can quite easily cope with around 100 cases a day, as we have seen over the last few weeks. In fact SA has more beds than UK with a similar population size and look how high their numbers are. The whole point of flattening the curve is to spread the load on hospitals over a longer period, not to try stop it completely.

So does Karim want to stop Corona completely, which as he himself admitted is not possible, or does he want to flatten the curve, or has the ANC interfered with his prognosis? The numbers do not add up – South Africa is the only country in the world whose infection numbers dropped form Day ONE of the lockdown, and even worse, two weeks later when they should have started dropping, they went up! Experts the world over say infections numbers are at least ten times more, so why did Karim peg South Africa’s emergence from Lockdown to such a low number? Clearly they want to keep it in place.

Despite all their bravado and virtue signalling, the ANC regime and Ramaphosa are also very, very scared and know they will not cope when the full force of COVID19 hits, this is why they are so strict about it. They have seen all the bad press their Chinese counterparts, The Chinese Communist Party (CCP) are getting and it is starting to look like communism itself is facing an existential threat from this virus they started. The level of anti Chinese Communist Party activism inside and outside of China have reach unprecedented levels. mostly in reaction to China’s heavy handed response in trying to suppress news of the outbreak getting out. Likewise, the ANC know how fickle their electorate is, from years of practice of throwing the “white man bad” bone at their Pavlovian voters, they fear that if their voters start associating Socialism with CoronaVirus carnage and a catastrophic outcome for South Africa, ANC will be history. Even worse, if the CCPvirus epidemic brings about a “night of the long knives” scenario into the middle and upper class suburbs, the international ramifications to the ANC money machine, milking altruistic western aid, will be terminal. Like in Rwanda, their days in government will be over. So is it any wonder they are willing to risk the economy, or what is left of it, on the outcome of the epidemic in SA?

Their refusal to loosen up alcohol and tobacco rules is totalitarian, draconian and ridiculous like a modern day Prohibition, and really distracts from the true purpose of the lockdown. Instead they offer to help these businesses onto welfare dependency by telling them to apply for financial assistance from the government – converting capitalism to socialism. Sure they do not want any drunken brawls causing hospitals to become swamped again, but it is not that difficult to setup and enforce restrictions and quotas, after all they are good with that. In a seven page long reply, the office of the state attorney said the decision for a national lockdown was not taken lightly and that all trade, “except truly essential services“, was halted in an attempt to maximise the effects of the national lockdown and to prevent the virus from “ravaging” South Africans living in the poorest conditions (their voters).

If your voters are on the wrong side of the bell curve, are narcissistic, unruly and extremely disobedient, you have to play nanny state, something communists love doing anyway. So, ironically they will have no choice but to use a heavy handed totalitarian approach like the Communist Party of China did. Like we said before, CoronaVirus for the ANC is the gift that never stops giving. This is their big opportunity to cement Socialism into the system and to give Capitalism a big knock. Ramaphosa must be really tired of Rothschild whispering in his ear, telling him what to do! Although like all communists, he seems to have forgotten where the money comes from, but what do you expect from someone who became a billionaire because he is black, and has no qualms in removing private property rights in SA.

Not being a drinker or smoker I have no problem with these draconian measures, however it is almost certainly going to promote lawlessness, illicit trade and even resentment, protest, looting and violence. As one person who was arrested for disobeying the lockdown said, “I would rather die of Corona than of hunger” – When it comes to addictions like alcohol, cigarettes and certainly drugs, this is probably even more true. Unfortunately these are the very people who are more susceptible to the CCPvirus.

So it boils down to a world where there is free choice with heavy regulation, or a totalitarian regime that makes, and enforces your choices and lifestyle for you. It should be no surprise the the Marxist ANC and Ramaphosa chose the latter, and it can only mean dark days ahead, much like we saw in China where people were locked into their houses or state controlled properties. As SA-News reported, we saw in Limpopo two junior doctors who were not allowed to self isolate, even though they had asymptomatic Covid19. The provincial legislature even went to court to get an arrest warrant, then the police arrested them and took them to a TB hospital that had been emptied of its TB patients, to accommodate COVID19 patients.

Once again, as Karim said, 80% of cases will be mild and will be able to self isolate, so the draconian measures and low thresholds are definitely out of place, which means the ANC want to use COVID19 for other purposes. Indeed, the CoronaVirus carries a silent passenger, another deadly virus called Communism! 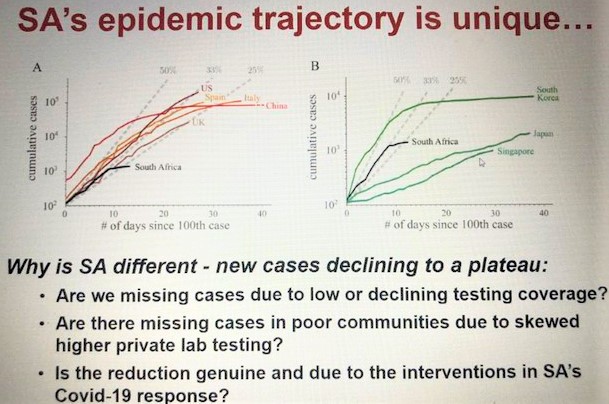 SA’s Unique Trajectory is no Coincidence, it is just not real…