For all those dedicated yet misled subscribers and supporters of mainstream media who think their favourite daily news platform is never wrong, here is a whopper! News24 (NASPERS) even issued an apology to the Bill and Melinda Gates Foundation for their fake “Africa vaccine” story on 2020-04-05 at 22:22 – But this was not the first time they deliberately spread virus panic and fear, using words like “Say You Want to Kill Off 95% of The World Population…” in their main Corona Virus news coverage!

On Saturday, 4 April, News24 published an article using the inflammatory headline “Bill Gates confident a potential coronavirus vaccine will work in Africa, but Twitter does not think so“.
It seems NEWS24 do not know the difference between a testing kit and a vaccine, because it was testing kits that Bill Gates discussed with Ramaphosa, according to Ramaphosa’s tweet, which this story was based on.

NEWS24 admit they used a social media tweet from Cyril Ramaphosa’s Twitter account, about support from the oligarch Bill Gates for South Africa’s health needs, as the basis for their wild conspiracy theory about the richest man in the world testing vaccines on poor downtrodden Africans. Embedded in Ramaphosa’s tweet was an excerpt from an interview by the far left wing activist Trevor Noah with Bill Gates, (gotta keep that white guilt flowing you know), during which Gates details his support of efforts to fight Covid-19 as quickly as possible. However this in itself is fake news as there is no way whatsoever that SA will get sufficient testing equipment in time, so Ramaphosa is just once again telling people what they want to hear.

NEWS24 also admit that nowhere in the interview does Bill Gates mention testing a vaccine in Africa and also admit in their apology that in his tweet, Ramaphosa stated that Bill Gates will support South Africa with testing kits and research.

Clearly the NEWS24 headline was a fabrication and not supported by the substance of the story whatsoever and was pure sensationalism and conspiracy theorizing. Even though News24 removed the article as soon as it was brought to their attention, one must wonder how the hell did this happen in a multinational corporation with so many staff on such huge salaries? Should News24 be allowed to get away with just an apology? 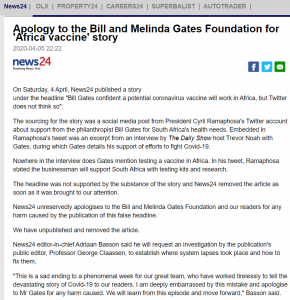 Interestingly, News24 unreservedly apologised to the Bill and Melinda Gates Foundation and their own readers for any harm caused by the publication of this false story, but no apology to Ramaphosa? As we know their only interest is money and sales. In fact two days later Naspers announced the completion of a share buyback of their own shares, when shares are at a historic low, netting themselves a whopping R3.3 Billion as the internet giant (Naspers) completed the R22.4 Billion share buyback programme on March 24th. Over nine million Naspers N ordinary shares were bought back.

“This is a sad ending to a phenomenal week for our great team, who have worked tirelessly to tell the devastating story of Covid-19 to our readers. I am deeply embarrassed by this mistake and apologise to Mr Gates for any harm caused. We will learn from this episode and move forward,” the left wing News24 editor-in-chief / spin doctor, Adriaan Basson said. He claims he will request an investigation by the publication’s public editor, Professor George Claassen, to establish where system lapses took place and how to fix them, however it seems as if there is something fundamentally wrong with the way they create “news”, as this is not the first time they have indulged in fear mongering and sowing virus related panic.

Previously, in their efforts to “work tirelessly to tell the devastating story of Covid-19″, on the top of the homepage of their main coronavirus coverage, they featured a FICTIONAL story called Fever, of a pandemic raging through the world killing millions! This in the early days of the actual virus hitting SA, and they associate it with a fictional thriller story about wiping out 95% or the world population – spreading panic, fear and conspiracy theories about coronavirus? 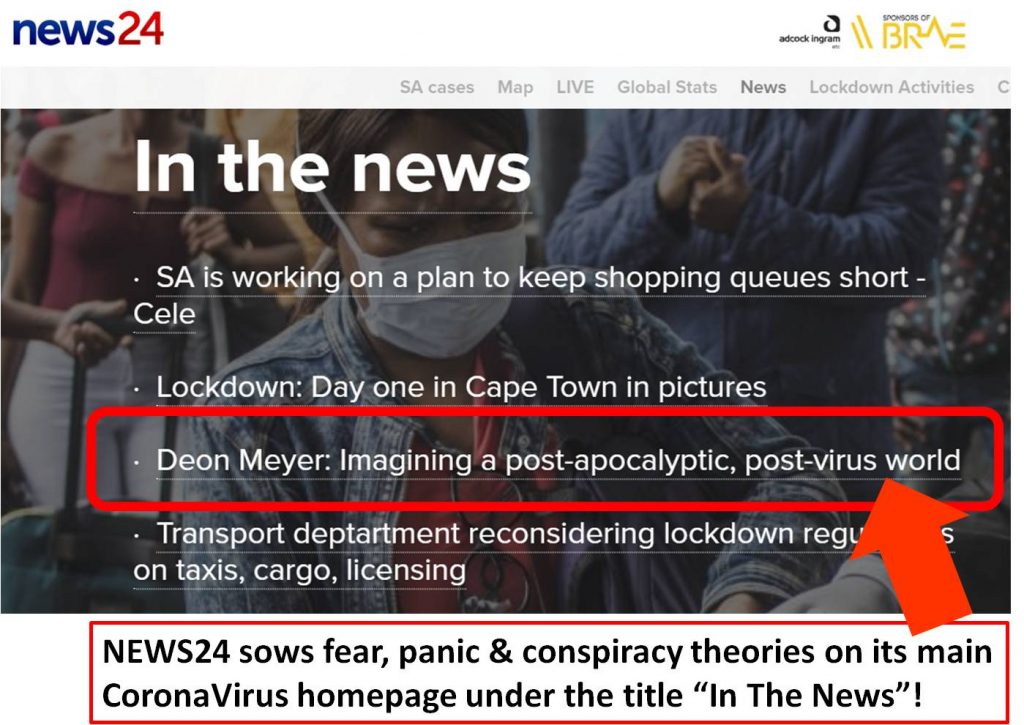 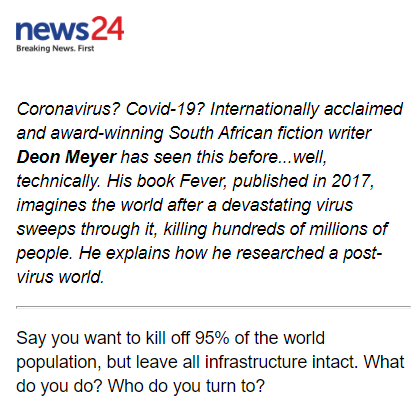 Wow! No wonder there is such a large #BoycottNaspers movement.