I came to South Africa to investigate the plight of the white farmer, who is being hunted from his land by gangs of black farm attackers.

These gangs are coordinated, equipped and organized by syndicates led by dangerous men.

But it doesn’t take long to understand that the victims of farm attacks are not just the farmer, his wife, and his children, but black farm workers too.

Living in compounds on the farm, paid a few hundred Rand a day (around $8 – $14 US dollars), they are dependent on the white farmer to survive.

Some farmers are fair men and good bosses, providing homes for workers’ families, paying their workers well and helping with healthcare or additional leave.

And some farm workers seem happy on their farms.

I am sitting with Maria on the porch of the farmhouse where she works, watching her cuddling the farmer’s child she has brought up as her own. Maria is a housekeeper for a white farmer. She says she doesn’t know how old she is, and is content to have a life not defined by numbers.

She judges her age by the children she has cared for: three generations of one family, from the grandfather to the little girls.

I ask her about the farm attacks and what has happened in a single generation for everything to have gone so horribly wrong. I ask her why young black men commit these attacks when they know farm workers just like she depend on these farmers to survive.

She tells me they are young and stupid, that they have nothing and have learned that the quickest way to get something is to take it. They see the farmer’s nice house, his fancy clothes, guns, and cars, and they want it for themselves.

She reminds me that without interference from outside, black and white people work perfectly well together here on the farm.

Indeed, there are roses here along the fence line, a neatly cut lawn and rolling hills of lush grass and crops. But behind the white picket fence, the reality of trying to survive here on the farm is stark.

The farmhouse sits behind huge gates and electric fencing. There are cameras and metal grills over every window. Behind the kitchen door, the house is one giant safe room – reinforced, alarmed and armed. Even the ceilings are stripped out to give the family a chance to climb up into the rafters and gain an advantage over the guns of any attackers.

The farmer’s wife says they are not idly waiting to be attacked; they are prepared for the attack when it comes.

Their two-year-old knows where the panic buttons are. She knows that if she finds herself alone and mummy and daddy are hurt and aren’t moving, she must run and press the closest button she can find. 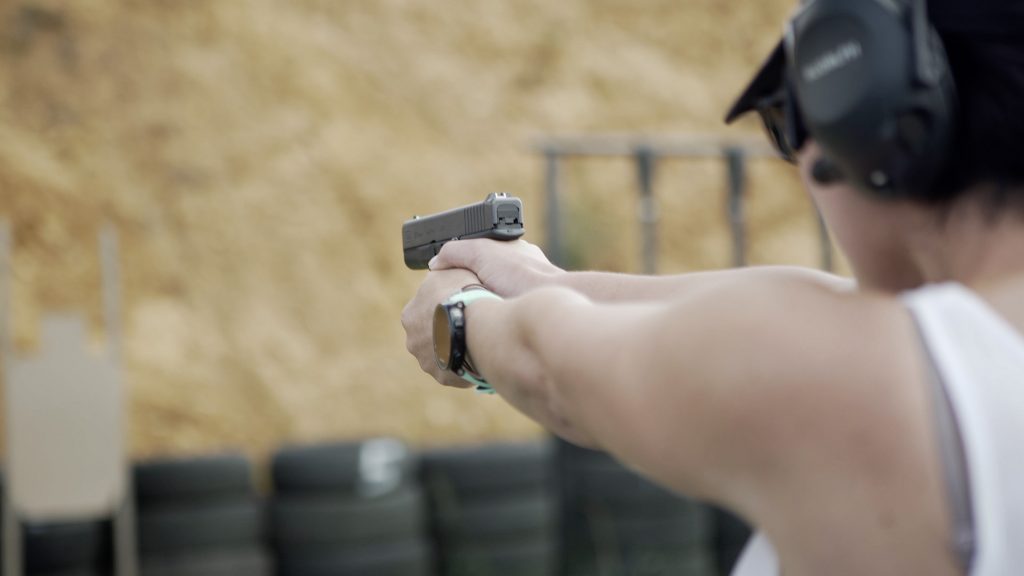 It’s an odd way to live. Just like the wealthy farms set up like a maximum-security prison with two-million-dollar mega-fences to protect the fruit, here is a family just trying to live a normal family life. Inside a safe house. With panic buttons, even the baby can operate.

I wonder about this difficult relationship, living alongside workers who might, under the circumstances, betray your trust. I ask the farmer’s wife how she handles it, knowing that the lovely Maria has been with her family for three generations and has shown true love and loyalty over many decades.

“I can’t trust any of them,” she says. Her voice betrays neither hatred nor prejudice, only the sadness of her reality. “I can’t.”

I have spent time with these black workers, talking about their lives here and how they feel about living in the compound, working hard on the land. And I am uneasy.

I hear them telling me the life is very good, smiling big, broad smiles. One worker tells me that if they stick to the rules there are no problems. No drink, no drugs, no problems.

They have the weekends off, and are here now on a Saturday afternoon organizing their washing, fishing in the dam, listening to music, getting everything in order for the week ahead. They have ten days’ holiday a year and send the money they earn back to their wives and families living in townships away from the farm.

Runnik is here to build a swimming pool for his boss. He shows me pictures of his family on his phone, proud of his children and the house he has built for them. He hopes his daughter will be a doctor and travel far from here.

Another housekeeper kindly helps me with my washing from a week on the road. I wonder how she feels working in the big house on the top of the hill, walking down the long road to the compound every night to sleep in no more than essentially a concrete box with wooden doors. What are her choices?

In the morning, I watch the workers climbing back up the hill in nearly 100-degree (40 Celsius) heat, up towards the house on top of the hill to work for the man living there with his swimming pool, who owns all the land as far as the eye can see – land filled with trees dripping with macadamias and weighted down by avocados. I wonder how the workers really feel.

You hear stories of “disappearances,” of workers who stepped over the line. Rumours of brutal treatment at the hands of the farmers are rife. This week a farmer’s wife (as the farmer himself has fled, from what I’m told) and son have been arrested for allegedly throwing a farm worker into a septic tank and making him drink fecal matter.

A 36-year-old man who worked as a mechanic claims the farmer and his son tortured him on December 9, 2017, after he failed to switch on the engine of a septic tank pump-machine. The father and son duo allegedly started swearing at the mechanic just before midnight and called him a “useless kaffir.”

“His son tightly held my hands behind my back and dragged me towards the sewer hole. His father took a big jug, dipped it in the sewer hole and forced me to drink its contents while calling me a ‘kaffir.’ He did the same thing twice and I was powerless to fight them back.”

The farm attackers may not be the only monsters on some farms.

And it is easy to see how some black farm workers might feel embittered by their life, or at least by the stark inequalities. By the fact that a life of relative servitude can be okay if you keep your head down, follow the rules and don’t ask questions; if you accept the status quo, that life here in the compound is far better than life in the townships, and safer too.

You can see how easy it is to sow the seeds of dissent among such workers, how simple it is to fire them up with anger about the impoverished life they lead, and actively recruit those willing to make easy money from farm attacks.

In a first for the media, I arranged to meet one of these recruiters. He is part of a syndicate responsible for violent crime in South Africa: drugs, corporate theft, and farm attacks.

His job is to infiltrate the lives of the farmer and his family, learn their movements and habits, locate their safe and their weapons, identify their weaknesses, and use all that information to prime the gang preparing to attack.

He recruits others to do the same. His syndicate boss dresses him up with a nice watch and money for his wallet, lends him a car, and sends him to lure other farm workers to become informants.

He tells me, wide-eyed, how he sells them the dream:

Farm attacks are not the random events they might appear to be. They are coordinated and equipped from the outside. But many it seems is set up from within.

And it is a story I hear repeated over and over by the farmers I meet. Robert, Marietta, and Bernard have all been victims of these attacks. Robert knew the men who came to torture him and kill his wife, Sue. Marietta knew the voice behind the shotgun that blew her face away. Bernard knew the farm worker who sold the information on his dad; his dad was killed but the worker is still on the farm today, protected by employment law.

It is impossible to reconcile these truths. Black farm workers endure lives of relative servitude for food, a meager salary and safety; some like Maria seem perfectly content with this life. But the biggest threat to the white farmer is the disgruntled worker paid, housed and fed by his hand.