#TheAfricanWay: Orange Free State Too Dangerous To Live in? Winburg & Kroonstad Have Dead Pigs & Raw Sewage in River & Dam, Too Polluted to Purify!

In Winburg the water that is coming out of taps is grass green since 28 December 2019. The DA has now laid criminal charges in terms of the Water Act against the Mayor and municipal manager for criminal negligence for their failure to provide clean water, but what will that help? 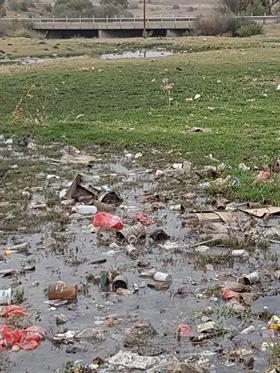 Local residents have placed pictures on Facebook of dead pigs that float in the water in the Vals River which flows past Winburg and through Kroonstad. The local dam is also completely polluted by raw sewage. Brunhilde Rossouw, a local DA councilor, says the sewage pump system has not been working for 3 years. A spokesperson for the municipality fobs it off only saying that there is a drought and that that is the reason why the water in the taps is green, he said nothing about pollution or raw sewage in the water.

“When people wash their clothes, they come out dirtier than before. There is no healthy water to drink,” she said.

A resident, who asked to remain anonymous, said, “We have been promised better water but nothing changes. We don’t have a choice but to drink it and use it on a daily basis. Even though it’s not safe, we drink it. We don’t wear white clothes any more because how will we wash it?” he asked.

Another resident, Nomakhaza Moloi, said it was a huge inconvenience.

“There are red worms coming out of the water and it stinks like sewage. We can’t cook with it or drink it. If you can afford, you have to buy your own, if not you use the same water. It’s bad.

Analysis – The first thing one wonders is: how do the people of this municipality even live? The second thing, is why have they been accepting it for so long? In this day and age of social media, why have they not been mobilizing? Why no boycott of taxes because of life threatening water? It shows an inability to mobilize or speak out. It’s also the reason why the ANC has been getting away with state capture for so long. We just accept anything with our mouths closed and we don’t know the first thing about standing together. Where is your civic mobilization? Where are your local leaders? Do you think voting every 5 years will save you? In that case you will have to accept sewage water in your taps and there is nothing we can do for you.

The rot in this municipality is also just a reality which is repeated everywhere in the Free State to a lesser or more serious degree. What it does also show is that what is happening there is just the advance of #TheAfricanWay to the Free State which was once a lush and beautiful province with beautiful towns.

#TheAfricanWay will always ensure that looting and negligence is the order of the day and nobody will care. The African Way means “Tt is my turn to feast at the table and to hell with the rest“. This is what will happen all across the country where black Africans are in charge because this is their way. They don’t care about building anything sustainable and about such concepts as accountability, maintenance or service standards, not even their own people suffering under these conditions will care. This is the harsh reality and plain facts. Jacob Zuma himself said corruption is a Western word…