It must really burn for African Councilors, ANC Officials & Ministers to know Trump was right in calling South Africa a sh*thole, yet despite this, they still cannot resist the urge to steal everything and anything that is not put beyond their reach! A direst result of this unbridled looting is a Tax Boycott which is to begin in North West province, where the only fontein to be found is #Kakfontein.

#TheAfricanWay of looting, destruction and lack of maintenance seems to have taken an accelerated path in the North West province, as sewage and other municipal services have totally collapsed in town after town. Like Ramaphosa said, the coffers are empty and there is nothing left to loot, never mind pay the actual bills! The stench of raw sewage is everywhere. Henk van Wyk, a resident and businessman of Stella told Netwerk24 that the whole sewage system in the area is developing into a full scale disaster. Raw sewage is overflowing in the system and then runs into dams and into a salt pan from where it flows into the ground water, which is the only source of water for Stella and the nearby township.

In Koster, residents are complaining about raw sewage that has been flowing like a river into a gravel road and a nearby field in the vicinity of the Koster club. The gravel road has to be used by people, and residents say the stench is unbearable. Children from the township sometimes play in the sewage water. Residents also say that the town is getting less visitors, which is bad for local business, because of the stench in the town. A DA and VF+ councillor in the area told Netwerk24 that they are reporting all the sewage leaks but nothing is being done.

Carel van Heerden, chairman of the Kgetleng rivier municipality ratepayers association – the municipality comprises Koster, Derby and Swartruggens – says they have informed the North West government that residents will start withholding taxes from the end of March. They will pay their tax into a trust account and provide services like sewage management, water provision and power management themselves. They say they have no choice because municipal services have collapsed and there is no prospect of it improving.

Mr van Heerden told Netwerk24 that the North West MEC responsible for municipalities, has admitted to them that the municipality is bankrupt. Mr van Heerden says even R80 million of drought relief money is also gone and stolen. He also said 18 municipal vehicles were repossessed and traffic cops are having to do footbeat only. Mr Van Heerden also said they also want to approach the court to disband the council, force the provincial government to appoint an administrator and get a forensic investigation into the municipality done.

In the Brits area, which is called the Madibeng municipality, raw sewage is also running like rivers into streets and causing damage to roads, especially in the Primindia neighbourhood according to Ronelle Gous, a local DA councillor. 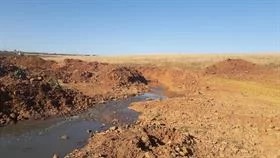