White South Africa, you have been OWNED! Enslaved and Beaten.

An ANC circular (pic below with transcript), that has come to light that was circulated in 1993 after the supposed “Peace Negotiations”, exposes the criminal, bad faith, mindset of the ANC Communist movement at the time.

Predictably this document will be debunked by all and sundry from the Communist Front, most aggressively probably from the liberal whites, who in their mindless pursuit of the “moral high ground” have been fooled and enslaved by an enemy, who have acted in bad faith, while they themselves have acted in good faith, despite accusations of foolhardiness and treason by more reasonable and conservative minded european South Africans.

Whether real or not, every single clause in the document is accurately reflected in the reality of the post apartheid meltdown and explains many observations and events. Almost every aspect of civil and public life can be described as whites being enslaved by black masters for their taxes and keeping the country and its economy going.

Apart from obvious racist Affirmative Action and Black “Economic” Empowerment laws, 99% of the taxes are paid by only 3.2 million (mostly white) people in a population of 50 Million!

Yet there are 15.5 million people on Welfare Grants paid for by these 3.2 Million!

80% of taxpayers do not even vote for the ruling ANC party and its hidden unelected shadow, the Communist Party.

The document also exposes the constant manipulation, in reality, of its people by the Communist Party / ANC. The constant racial polarisation of the population by black leaders has taken on despotic genocidal proportions.

Is the mention of whites not having ammunition after 1994 an attempt to brazen criminal elements to attack whites and farmers? Much like protesters in Marikana were told by manipulative “witchdoctors” that the police bullets would not harm them. Or how the Zulu’s at the battle of Blood River were told they had special powers against Boer bullets and ordered to run to their deaths?

Is this how the Bantu waged their colonisation campaign down from Central Africa over the centuries, using their own people as fodder with no regard for the people or cultures they decimate in their imperial struggle for supremacy and domination? Their total disregard for the 11 cultures forced and bound together by the Republic of South Africa, and their abuse of minority and human rights, so characteristic of a communist regime, like China and North Korea – with whom the South African government now ally themselves, clearly indicates that the match between Bantu and Communist in Africa is a match made in “hell” and explain the almost total conquest of Africa by Marxist Communism, despite the Trillions of dollars of direct aid sent to Africa by the “good faith” West. Aid which only serves to further sabotage and enslave Africa.

After a mere 20 years, European South Africans seems to have meekly accepted their defeat and enslavement at the hands of the Communist driven black masses. After three and a half centuries of non assimilation, it seemed the Central Africans, were finally aided by the Communist Marxists to defeat the Europeans.

…and the certainty of their impending extermination, as it has become patently clear that the communist masters have lost control of their baying black hounds, and soon the white goose who lays the golden tax egg will be unceremoniously cooked.

Is this the beginning or the end of the Bantu Empire? 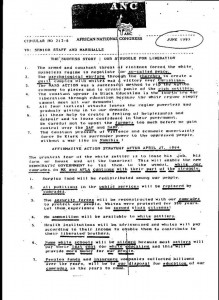 The greatest fear of the white settler is to loose his job, his farm or house and all the luxuries! This will enable the new DEMOCRATIC GOVERNMENT to tax them to the utmost, while our comrades in MK and APLA continue with their part of the struggle. 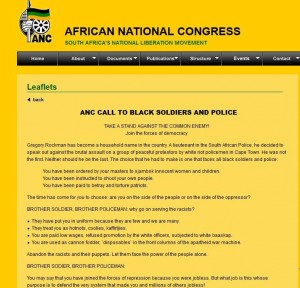